Our farm has been blessed with a large amount of natural pollinators; however, as is for the case for so many other farmers across the country, our bees continue to dwindle. So this year, we invested time into increasing our bumblebee population.
Bumblebees, you ask?! WHY? Well, although there are far more honey bees available, bumblebees can pollinate many more flowers. They pollinate more, because with their fast wing speed and big bodies, they vibrate the flowers, causing them to release more pollen (this is called, appropriately, “buzz pollination”), which helps plants produce more fruit.
It’s true they may look more menacing, but they’re actually far more docile than most honey bees, and considerably less likely to sting. In fact, male bumblebees don’t even have stingers. 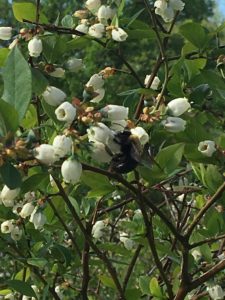 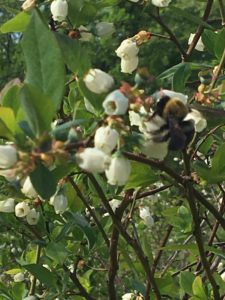 The bumblebees have been hard at work, and unlike honeybees, they don’t mind working in the rainy cool days. They’re hilarious to watch fly, they somehow seem to defy everything we know about gravity and aerodynamics and just fly anyway. Apparently bumblebees flap their wings back and forth, instead of up and down, and that’s why this big round, disproportionally-sized bee can fly.
If you find one flying around you, just stand still. It’ll fly away as soon as it determines you’re not a flower. Come berry-picking time, the bees will be off pollinating somewhere else. Once all the blossoms are gone, the bees will be too. And then it will be almost time for you to join us at the farm! Bees do an important job, and we’re grateful for their help.

Places of Interest Near Us

Thank you for joining us – 2020 season now CLOSED

We’re so glad you could join us for the 2020 growing season, which turned out a little shorter than we’d hoped this time. Join our email newsletter list to hear from us again when the growing and picking season starts up next year. Check Facebook for occasional farm updates, pictures, recipes, and more!